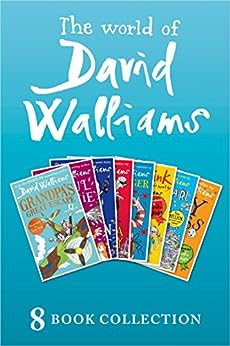 PRAISE FOR DAVID WALLIAMS:
“A pleasure to read. A beguilingly funny, original and thought-provoking tale… hilarious” Amanda Craig, The Times

“a new Roald Dahl” – The Times

"Another triumph for David Walliams. His books are a breath of wonderful fresh air" – The Sun

David Walliams has revolutionised reading for children and become one of the most influential children’s writers today. Since the publication of his ground-breaking first novel, The Boy in the Dress (2008), Walliams has seen unprecedented growth with global sales exceeding 40 million copies, and his books translated into 53 languages.

Born in London, Tony Ross went to art school in Liverpool. His cartoons have appeared in famous publications the world over. His first book, Hugo and the Wicked Winter, was published in 1972. Tony has since written over 100 books and illustrated over 2000!

Quentin Blake taught at the Royal College of Art, where he was Head of the Illustration Department before becoming a full time illustrator. He has collaborated with writers such as Russell Hoban, John Yeoman, and most famously Roald Dahl. He has also illustrated classic books for adults and created much-loved characters of his own such as Mr Magnolia and Mrs Armitage.

4.6 out of 5 stars
4.6 out of 5
239 global ratings
How are ratings calculated?
To calculate the overall star rating and percentage breakdown by star, we don’t use a simple average. Instead, our system considers things like how recent a review is and if the reviewer bought the item on Amazon. It also analyses reviews to verify trustworthiness.

S. North
3.0 out of 5 stars Who wouldn't love them! Shame about the scratches/jumping...
Reviewed in the United Kingdom on 27 November 2017
Verified Purchase
Great cds - my daughter has a tendency towards car sickness and these take her mind off it!
2 of the cds were a little jumpy in places.

Edited to add that another cd has an area where it jumped...

Edited again Feb 2018. Have now listened to all the cds and loved the stories and enjoyed listening to them. However, very disappointed that about half of the cds jumped in places. Another star knocked off! So only 3 stars due to quality of cds.
Read more
2 people found this helpful
Report abuse

Mrs C.
5.0 out of 5 stars Five Stars
Reviewed in the United Kingdom on 13 February 2017
Verified Purchase
Fantastic. What we love most is that the stories are read by David Williams himself. Excellent CD storage.
Read more
7 people found this helpful
Report abuse

Rainbow
5.0 out of 5 stars Fantastically read stories by David Walliams.
Reviewed in the United Kingdom on 3 August 2019
Verified Purchase
Absolutely brilliant set of audio stories. Very well read and acted throughout. Even adults have commented on how enjoyable they are to listen to. Well worth every penny.
Read more
Report abuse

Amanda van Mulligen
5.0 out of 5 stars Kept them going at bedtime for months!
Reviewed in the United Kingdom on 2 May 2019
Verified Purchase
If you like David Walliams then this audio set is worth the investment. All the favourites in one bumper case - my sons have listened over and over to the different stories, having read them all first.
Read more
Report abuse

Claire B
5.0 out of 5 stars Excellent value and great storeys
Reviewed in the United Kingdom on 28 December 2018
Verified Purchase
Came quickly. Package looks great. It's not a storage tin (which I had thought from the pic) but it's actually a cd book you can flip through. Just the top and bottom make it look like a decorated tin. Very nicely made.
Read more
Report abuse
See all reviews
Back to top
Get to Know Us
Make Money with Us
Let Us Help You
And don't forget:
© 1996-2021, Amazon.com, Inc. or its affiliates