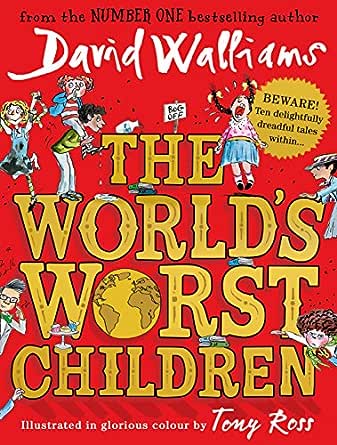 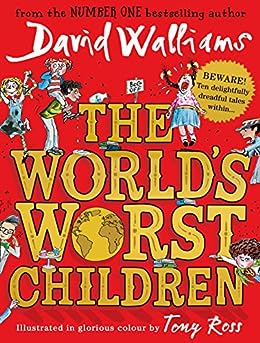 David Walliams – comedian, actor and author – continues to take the children's literary world by storm. His tenth novel, BAD DAD, was an immediate number one, following the triumph of THE MIDNIGHT GANG, the biggest-selling children's book of 2016. WORLD'S WORST CHILDREN 2, which published in early 2017, spent four weeks at industry number one and eight weeks at the top of the children's chart. They have achieved unprecedented critical acclaim – and RATBURGER, DEMON DENTIST and AWFUL AUNTIE have all won the National Book Awards Children's Book of the Year. David's books have now exceeded 100 non-consecutive weeks in the children's number-one spot, and have been translated into 53 languages, selling more than 24 million copies worldwide.

Born in London, Tony Ross went to art school in Liverpool. His cartoons have appeared in famous publications the world over. His first book, HUGO AND THE WICKED WINTER, was published in 1972. Tony has since written over 100 books and illustrated over 2000! His creations Towser and The Little Princess have been turned into TV series. --This text refers to the paperback edition.

“A pleasure to read. A beguilingly funny, original and thought-provoking tale… hilarious” – Amanda Craig, The Times

"Another triumph for David Walliams. His books are a breath of wonderful fresh air" – Sun

--This text refers to the paperback edition.

Page 1 of 1 Start overPage 1 of 1
This shopping feature will continue to load items when the Enter key is pressed. In order to navigate out of this carousel please use your heading shortcut key to navigate to the next or previous heading.
Back
Next
click to open popover

4.8 out of 5 stars
4.8 out of 5
3,692 global ratings
How are ratings calculated?
To calculate the overall star rating and percentage breakdown by star, we don’t use a simple average. Instead, our system considers things like how recent a review is and if the reviewer bought the item on Amazon. It also analyses reviews to verify trustworthiness.

Boltz
TOP 1000 REVIEWER
5.0 out of 5 stars Good author for kids of today, from one who grew up with Roald Dahl
Reviewed in Australia on 27 October 2019
Verified Purchase
Bought this for my niece as a Xmas gift, she owns another book from this author, so at such a good price, sold!
Read more
Helpful
Comment Report abuse

J M and S LOVELESS
1.0 out of 5 stars Do not purchase for paperwhite.......not clear on thr store.
Reviewed in Australia on 19 September 2016
Verified Purchase
Extremely disappointed with this book as we are unable to read it on our Kindle paper white. There was very little indication that it is was only available on certain devices.

My son is very upset that he is unable to read his new book on his device.

Sarah
3.0 out of 5 stars Bit funny
Reviewed in Australia on 17 September 2020
Verified Purchase
Not that great but a bit funny still got the family giggling no hysterics though

Gerrard pique
5.0 out of 5 stars Great
Reviewed in Australia on 2 June 2019
Verified Purchase
Funny whacked and a lot more than I thought it was going to be real Manwel) NEUER 077 weeks 6th to in europe
55253

Jane Carrington
5.0 out of 5 stars Well worth the hard cover version
Reviewed in Australia on 22 November 2019
Verified Purchase
This was a gift . Much better in the hard cover format.
Read more
Helpful
Comment Report abuse

Djilly L.
5.0 out of 5 stars Incomplete
Reviewed in the United Kingdom on 28 March 2019
Verified Purchase
The author has overlooked the fact that several of the worst-children-ever reside in MY house. In those rare cases that these children bother to look up from their Ipads they refer to me as ‘dad’, usually followed by a demand for money or sweets.
So the book is incomplete at a minimum.

Take for example Juliet-the-Sloth; she leaves her rubbish everywhere throughout the house. Her clothes lie scattered on the floor and hallway for days. She bites nails, only brushes her teeth under immense pressure or in exceptional circumstances. And is happy to go without a shower for days in a row.

And why didn’t the book dedicate a chapter to Jonathan-the-wisecrack? – an annoying little chap that claims to know more about his favourite subjects (dinosaurs and Star Wars) than anyone else, he endlessly chats about these topics until your ears drop off. Worse, he is full of awful jokes; tends to run up to adults, grab them tightly only to .. start farting loudly.

So I got some first-hand experience with terrible cases myself. And I can tell you it’s not easy and very demanding. I'll be open to an interview with Mr Walliams when he is conducting research for his next book on this topic.

Chocolate fanatic
5.0 out of 5 stars Fun for the children
Reviewed in the United Kingdom on 17 October 2019
Verified Purchase
Don’t usually do book reviews but this is SO funny. What the children get up to is no-ones business and makes both my grandchildren really laugh out loud. Had a few David Williams books and they are to be recommended. I usually read the books to my grandchildren (8 and 6 - both girls) when grandad and me pick them up from school on a Wednesday while we are having coffees/cake in Café Nero. Good fun and holds their attention. They love looking at the pictures too and we don’t get very far in one reading session as they are constantly talking about what happens and looking at the pictures. A joy to read
Read more
18 people found this helpful
Report abuse

ydr1973
5.0 out of 5 stars Brilliant
Reviewed in the United Kingdom on 9 May 2017
Verified Purchase
My 8 year old son does not enjoy reading and books are a chore. Not this one , he loves it ! It's absolutely brilliant . Pure Genius . Thank you very much David Williams .
Read more
33 people found this helpful
Report abuse

Magic Mummy
5.0 out of 5 stars Five Stars
Reviewed in the United Kingdom on 16 March 2017
Verified Purchase
10 year old daughter loved it - was finished the same day it arrived, so definitely a success!!
Read more
29 people found this helpful
Report abuse
See all reviews
Get FREE delivery with Amazon Prime
Prime members enjoy FREE Delivery and exclusive access to movies, TV shows, music, Kindle e-books, Twitch Prime, and more.
> Get Started
Back to top
Get to Know Us
Make Money with Us
Let Us Help You
And don't forget:
© 1996-2020, Amazon.com, Inc. or its affiliates