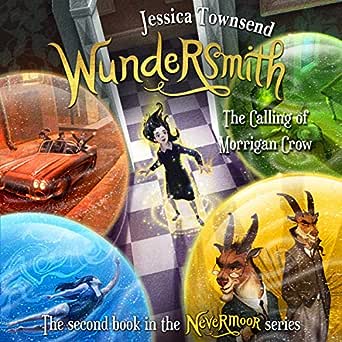 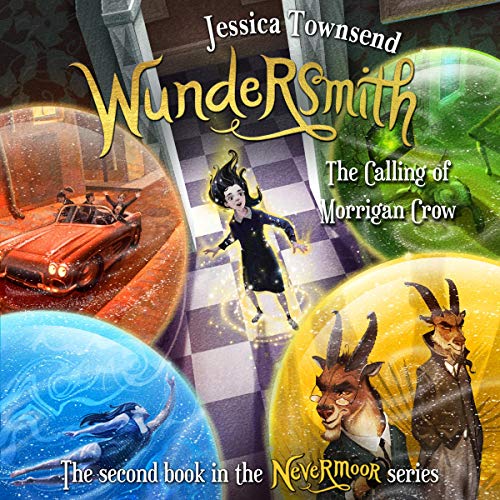 By completing your purchase, you agree to Audible’s Conditions Of Use and Privacy Notice.
Sold and delivered by Audible, an Amazon company

4.8 out of 5 stars
4.8 out of 5
1,062 global ratings
How are ratings calculated?
To calculate the overall star rating and percentage breakdown by star, we don’t use a simple average. Instead, our system considers things like how recent a review is and if the reviewer bought the item on Amazon. It also analyses reviews to verify trustworthiness.

Missamity
TOP 1000 REVIEWER
5.0 out of 5 stars A fun read which also teaches about human relationships
Reviewed in Australia on 9 November 2018
Verified Purchase
I didn’t think the second Morrigan Crow Book could be as good as the first, but this one surpassed all expectations. Morrigan is a three dimensional character with good and not-so-good in her. Eminently relatable and great fun! Her friendship with Hawthorne is realistic and the pace of the book is fast moving. Altogether a great break from reality!
Read more
One person found this helpful
Helpful
Report abuse

Fiona Ninnes
5.0 out of 5 stars More please!!
Reviewed in Australia on 11 December 2018
Verified Purchase
I didn't think that the second book could be better than the first one but I was wrong. I loved it. It sends the reader through a roller-coaster of emotions. It is fast-paced and complex - just like life. I highly recommend this for all age groups.
Read more
Helpful
Report abuse

annemarie
5.0 out of 5 stars Brilliant!
Reviewed in Australia on 15 October 2019
Verified Purchase
Loved this book, second in the series, and for me just slightly better than book one! And it's worth re reading, as is the first book in the series.
Read more
Helpful
Report abuse

Janet Caulfield
5.0 out of 5 stars Delightful, easy reading continuing adventures of Morrigan Crow.
Reviewed in Australia on 18 November 2019
Verified Purchase
Delightful continuation of the Nevermoor series, can't wait for her next book, have already preordered it.
Captivating adventures of this girl have me wanting to read more.Thank you Jessica for writing this series.

Lea
5.0 out of 5 stars Did not disappoint
Reviewed in Australia on 1 January 2019
Verified Purchase
His second instalment in the series was every bit as good as the first, and equally hard to put down! Can not wait for #3. A great read for teens and adults alike.
Read more
Helpful
Report abuse

Kim McLean
5.0 out of 5 stars Great Read
Reviewed in Australia on 30 November 2018
Verified Purchase
After waiting and waiting for Wundersmith to arrive I was not disappointed, I couldn't put it down until I'd read it all, the only disappointment would be now I have to wait for the next instalment.
Read more
Helpful
Report abuse

Elke Browne
5.0 out of 5 stars So much fun
Reviewed in Australia on 24 November 2019
Verified Purchase
Harry Potter meets Alice in Wonderland. A wonderfully written and exciting story not only for young people, but adults as well.
Read more
Helpful
Report abuse

Mercedes Mendoza
5.0 out of 5 stars A magical adventure with a good dose of silliness.
Reviewed in Australia on 6 November 2018
Verified Purchase
I can see the beautiful appeal this book would have to children but as an adult in my early 30s it was the perfect mini break from the hum drum.
Read more
Helpful
Report abuse
See all reviews

Arkham Reviews
3.0 out of 5 stars Enthralling, but not quite as original as Nevermoor
Reviewed in the United Kingdom on 3 December 2018
Verified Purchase
While I really enjoyed reading Nevermoor, I unfortunately found Wundersmith to be a bit of a mixed bag. To begin with the positive, the world building is still fantastic. The novel was as whimsical as ever, but this novel also seemed to be a bit creepier than the last. From the tension of the Ghastly Market to the pure horror of the Museum of Stolen Memories, this time the reader really sees beyond the wonder of Nevermoor to its dark heart. Yet, as scary as it could be in places, the book still felt very appropriate for it target readers.

Yet, despite the fact that Wundersmith was very original in places, this sequel also seemed to take a lot from Harry Potter. From the new addition of a magical school to the Nevermoor Bazaar and Ghastly Market (which were very similar to Diagon Alley and Knockturn Alley), it was impossible not to compare the two stories, which did detract a little for me.

The story was also not quite as focused as the last one. While everything did come together in the climax, the story was slow to start and it did not feel as though Morrigan was really working towards anything until late in the tale. It merely followed her through her miserable school life as she became more and more worried about her destiny as a Wundersmith.

Yet, the story was still enjoyable to read. I did not get bored as I was genuinely curious to see if things would improve for poor Morrigan. The climax of Nevermoor was so optimistic, yet things went downhill for her so quickly this time around. While I could not quite understand why her teachers felt that mistreating her was a great idea (you don't want her to be a danger, so you treat her abysmally?), the story did keep my interest because I was curious about how she would prove herself. The climax was also very exciting, wrapping up this phase of the story while allowing plenty of room for the story to continue.

Morrigan also received a great deal of character development this time around, as we see her slowly exploring what it means to be a Wundersmith, and if her teachers are correct when they say that it means that she is inherently evil. As Morrigan slowly starts to learn how to use her powers, I was left very curious to find out what the future will hold for her.

Yet, the other characters in the story don't really get so much room for development. Due to their fear of her, Morrigan does not get a lot of time to bond with her potential new friends. We also get a lot less of supporting characters - like Hawthorne, Jack and Jupiter - this time around, adding to Morrigan's isolation. This was a shame as the cast last time were all really colourful so I missed having them around.

Ezra Squall is also still a bit of a one-note villain. While his presence is felt in this story once again, I still did not get much of a reason to empathise with him. Although he wants Morrigan on side, he always just behaves like a typical bad guy and doesn't really have any redeemable features, which made him a little forgettable.

Anyhow, I think that about covers it. While I did enjoy Wundersmith and am curious to see where it will go next, I did not think it was quite as strong as Nevermoor. Here's hoping that the next novel is a bit more original.

LJBentley
3.0 out of 5 stars A good followup x
Reviewed in the United Kingdom on 25 October 2020
Verified Purchase
When I first read Nevermoor it completely blew my mind. Here it was. That new series that I had been waiting for. A fantasy book that didn’t leave me feeling disappointed or a bit flat. I wanted a one way ticket to Nevermoor.

And then Wundersmith was announced and I was in my applecart of happiness. I pre-ordered my copy and I waiting patiently by the letterbox on release day and then it was delivered. Hurrah.

And then I put it on my bookshelf and forgot to read it.

I know. I am a terrible person.

However, with the release of the third book in the series Hollowpox happening imminently I decided to grab Wundersmith and get lost in the wonderful world of Nevermoor once again.

In Wundersmith we see Morrigan beginning to grow up. She has started attending the Wundrous Society and has to deal with the everyday problems of being a kid and people being mean but also with the deathly blackmail that is being sent to her friends. They have to decide whether they will keep Morrigan’s secret even if it comes at a cost.

I really enjoyed Wundersmith. Morrigan has to learn to stand on her own two feet. Jupiter – her mentor – is otherwise engaged with serious Nevermoor situations and hasn’t got time for what Morrigan believes to be school girl problems. She has to toughen up.

Townsend also uses Wundersmith to reveal more and more of this magical world she has created and the more you learn about it the more you wish you were a character in the novel.

Whilst I probably enjoyed Nevermoor more than Wundersmith I can say that Townsend has kept the magic alive with her second descent into this fictional world and it has made me even more keen to read Hollowpox.

Jen Mum of 4
5.0 out of 5 stars Fantastic book
Reviewed in the United Kingdom on 4 November 2018
Verified Purchase
As a primary headteacher, I like to keep up with books I can recommend to my pupils. My 9 year old daughter passed on the first of the Morrigan Crow books which I loved. Great characters, an immersive world full of wonder and a cracking plot. I downloaded book 2 and have read it straight through. If anything, it improved on book one, bringing the reader further into the magical world of Nevermoor. I will be buying both books for school!
Read more
8 people found this helpful
Report abuse

sophie cox
5.0 out of 5 stars Amazing story and cover
Reviewed in the United Kingdom on 9 April 2019
Verified Purchase
THIS IS THE SECOND BOOK IN A SERIES.....
I really enjoyed this book a lot and days after reading it am still thinking about it and wanting to read more.
Middlegrade novel, this series is good for children aged 9 to 12 but like harry potter I think it can be enjoyed by all ages, I myself am 22.
This book is quite hefty and so maybe wait for the paperback to come out, however I would recommend this one as under the sleeve the hardback book is decorated beautifully.
Read more
One person found this helpful
Report abuse

Emma
5.0 out of 5 stars Fabulous and Magical Sequel
Reviewed in the United Kingdom on 21 February 2019
Verified Purchase
I was slightly wary going into this that it wouldn't live up to how amazing the first in the series was, but thankfully it was everything I'd hoped for, and more! I just adore this world and the magic and characters, everything feels almost nostalgic and filled with wonder like books I read as a child did. Cannot wait for the third book to be released, I'd recommend this to anyone aged about 8 upwards, and adults too!
Read more
One person found this helpful
Report abuse
See all reviews
Get FREE delivery with Amazon Prime
Prime members enjoy FREE Delivery and exclusive access to movies, TV shows, music, Kindle e-books, Twitch Prime, and more.
> Get Started
Back to top
Get to Know Us
Make Money with Us
Let Us Help You
And don't forget:
© 1996-2020, Amazon.com, Inc. or its affiliates